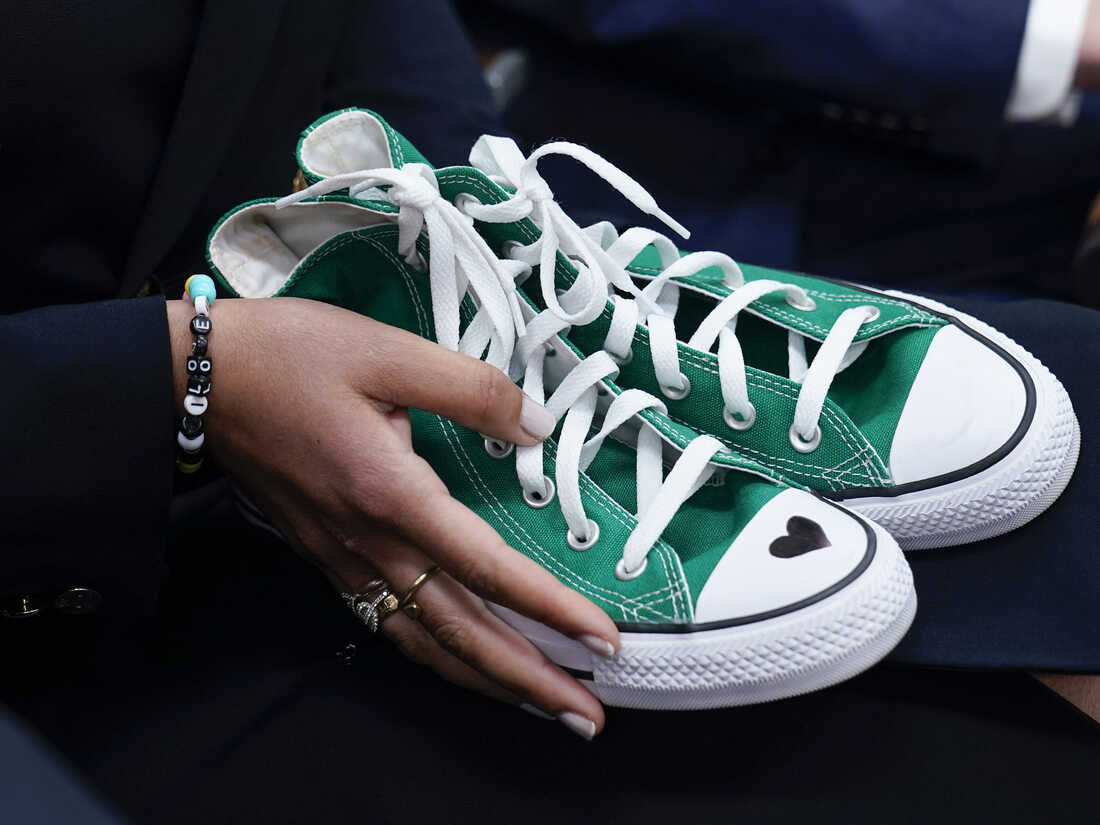 A pair of green Converse shoes, drawings and personal pictures are just some of the remaining artifacts of the victims of the Uvalde, Texas, school shooting. Actor and Uvalde native Matthew McConaughey and his wife, Camila Alves McConaughey, discussed some of these items during an at times emotional news conference on Tuesday at the White House.

Matthew McConaughey was in Washington, D.C., to call on lawmakers to address gun control and to share details of the 21 victims who died in the shooting.

One of those victims was 10-year-old Maite Rodriguez. A lover of animals and the environment, she dreamed of becoming a marine biologist. She often wore a pair of green (her favorite color) high-top Converse shoes with a heart drawn in marker over her right toes.

Camila Alves McConaughey held up a pair of green Converse shoes during her husband’s news conference.

“These are the same green Converse on her feet that turned out to be the only clear evidence that could identify her after the shooting,” Matthew McConaughey said, pointing to his wife.

It’s unclear whether the green sneakers were the same ones worn by Maite or whether they were similar shoes of the same brand and style.

Ana Rodriguez, Maite’s mother, has shared on Facebook that her daughter’s dream was to attend Texas A&M University-Corpus Christi to study marine biology. The school has since created a scholarship in memory of Maite that will go to a student from Uvalde who pursues a degree in marine biology.

Her mother wrote in a tribute to her daughter, “She was sweet, charismatic, loving, caring, loyal, free, ambitious, funny, silly, goal driven and best of all my very best friend!”

Matthew McConaughey and his wife traveled to Uvalde shortly after hearing word of the attack at Robb Elementary School on May 24, he said. They spent a week in town meeting with families of the 21 fatally shot victims.

While there, he learned of the hobbies and dreams of the children who were killed.

He spoke to the family of Alithia Ramirez, also 10, who loved to draw and paint. Her dream was to go to art school in Paris and one day share her art with the world. He held up a self-portrait the girl had created, of herself drawing while a friend who was struck and killed by a car last year looked down on her from heaven.

Actor Matthew McConaughey holds an image of Alithia Ramirez, who was killed at age 10 in the school shooting in Uvalde, Texas, as he speaks during a press briefing at the White House on Tuesday.

Actor Matthew McConaughey holds an image of Alithia Ramirez, who was killed at age 10 in the school shooting in Uvalde, Texas, as he speaks during a press briefing at the White House on Tuesday.

The McConaugheys also spoke with cosmetologists who specialize in mortuary makeup who dealt with the bodies of the students and teachers in Uvalde.

The fact that Maite was identified mainly by her sneakers and other students by DNA tests is because of the sheer violence inflicted by the AR-15-style rifle used in the mass shooting.

McConaughey said, “They needed extensive restoration. Why? Due to the exceptionally large exit wounds of an AR-15 rifle. Most of the bodies so mutilated that only DNA test[s] and green Converse could identify ’em.”

As prior reports have stated, the AR-15 rifle was a weapon designed for war and to inflict maximum damage.

Road Running Shoes for Every Workout