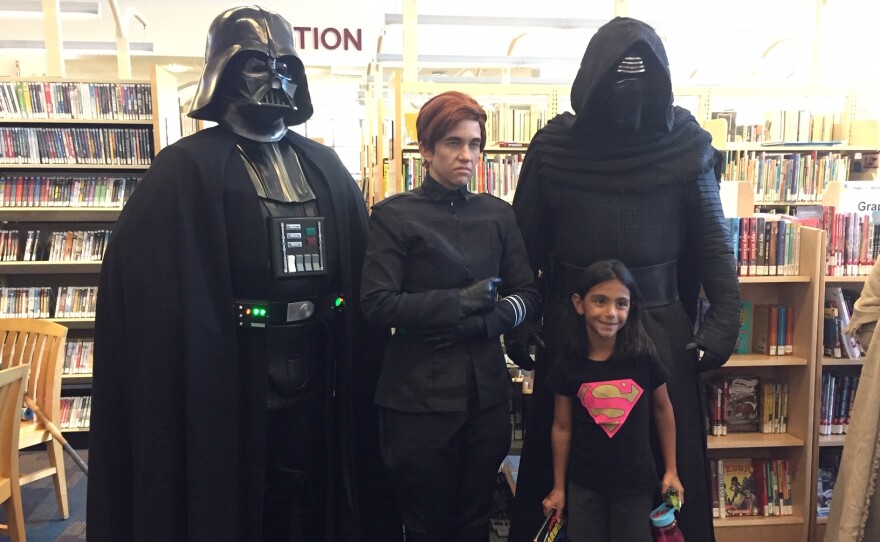 The 501st Legion is a worldwide costuming, or cosplay, organization run by fans dedicated to creating screen-accurate villainous costumes from the Star Wars universe.

501st invites you to the dark side

When I finally got my stormtrooper armor assembled and fitted (thanks to Nathan Seekerman), I knew there was only one place to go to find out if the costume was an accurate representation of a stormtrooper from the original Star Wars trilogy, and that was the 501st Legion, also known as Vader’s Fist.

The volunteer group is not affiliated with Lucasfilm, but its members have appeared as extras in the recent “Obi-Wan Kenobi” series and do appear at charity events and elsewhere for Lucasfilm. It’s a smart move for Lucasfilm to work with the organization because the members create costumes that adhere strictly to the look of the characters created by Lucasfilm. So, when some 501st stormtroopers appeared in “Obi-Wan Kenobi,” they arrived on the set in full gear, and the show didn’t have to spend any time or money having to make costumes for its extras. It really is perfect: Lucasfilm gets production value from filling out scenes with more characters, and fans get the thrill of appearing in a show they love.

I contacted the local 501st, called Imperial Sands Garrison, and was invited to an armor party. Legion Executive Officer Lindsey Cepak explained what that was.

“It is what we do at the local level to get members together,” Cepak said. “But it’s not only for members: It’s also for potential members who are looking to join the 501st or any of the other associated clubs, which would be like Rebel Legion or the Mandalorian Mercs. So, if you’re looking to build a costume or you’re not quite sure how to build it, or you’re working on something and you don’t know how to do something, but you know somebody else will know how to do it, you come here, and everybody gets together and works on the costume together.”

The 501st has very strict standards for approving a costume. For my stormtrooper, there is a highly detailed document called a character reference library, or CRL. In fact there is a CRL for each character.

Suiting up to be a stormtrooper

Dean Amstutz, the Garrison membership liaison, is in charge of approving all the costumes for the San Diego and Imperial County areas.

He explained the CRL.

“It’s basically the list of requirements you have to meet for the costume to be screen-accurate,” Amstutz said. “So part of the 501st Legion is that we are all about film accuracy. So we don’t want to look like just guys in stormtrooper costumes. We want to look like we stepped right off the film set and we look like stormtroopers. We want to recreate that sort of magic for our fans, kids and adults alike. So our members have gone through the movies, gone through if it’s comic books, cartoons, whatever, and will dissect the costume, and we will document every feature of it with photos. And that is the standard that I judge against.”

It’s a very high standard. But Cepak said first-time cosplayers should not be discouraged.

“If you just want to cosplay and you don’t want to be part of the 501st, it’s completely fine,” Cepak said. “Go out, find a costume you like. Get out there and just get with your other costumers at conventions. There’s Star Wars Celebration that we have every other year here in America. Go to San Diego Comic-Con. Just dress up in your favorite costume. It doesn’t have to be accurate. It doesn’t have to be perfect. It’s whatever you want to do for Star Wars and whatever makes you feel good representing a character that you love.”

Ermer Michelle Twaño had his first costume rejected as not 501st material, but that just inspired him to work harder. He even started to learn skills such as sewing and 3D printing to bring his costumes up to the next level.

“First, it was a hobby,” Twaño said. “I still work full time, but at the same time doing Etsy. Someone asked me: ‘Hey, can you print me a stormtrooper helmet?’ I’m like, ‘Yeah, sure.’ And then my friend said, ‘Why don’t you create an Etsy shop?’ And so I did, and then, next thing I know, I put some stuff on there, like robots and droid parts, and then, all of a sudden, it blew up. And then, now on my Etsy site, it’s actually official now. It’s called TD Outpost, and so it’s been an extra side business for me, too.”

Members of the 501st will lead a panel called Star Wars Villainous Costuming on Friday at 6 p.m. in Room 7AB at Comic-Con. The group also has a fan table at MZ-17 at the convention for anyone who wants more information.