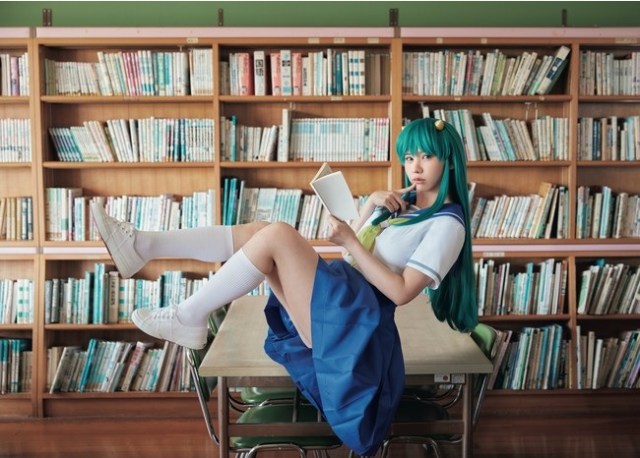 Manga legend Rumiko Takahashi is even designing a brand-new character just for Japan’s top cosplayer to pose as.

Fans first met Lum, the alien princess from Urusei Yatsura, when the manga debuted all the way back in 1978, and the character has been on fans’ minds again this year with the announcement of a new Urusei Yatsura anime that’s currently in-production. Unfortunately, we still don’t know when we’ll see the first episode of Urusei Yatsura Allstars, but we do know that we’ll be seeing more of Lum before the year is done, thanks to the latest project from Japan’s number-one cosplayer, Enako.

Enako is teaming up with Urusei Yatsura creator Rumiko Takahashi, who has a long list of other phenomenal hits on her manga artist resume as well, for the Enako x Rumic World Cosplay Album.

While the title is still tentative, the concept is set, as Enako will step in front of the camera to cosplay as characters from Takahashi’s myriad manga. Lum is already confirmed through the above preview photo, and publisher Shogakukan (which also publishes Takahashi’ manga) says that Enako will also be dressing as characters from Inuyasha, Ranma 1/2, and Maison Ikkoku.

▼ Lum, as she appears in Takahashi’s illustrations

Enako will cosplay as 10 different Takahashi manga characters, but Shogakukan hasn’t explicitly specified which ones. We can make a pretty good educated guess, though, as copies of the book will come with promotional postcards at some stores. Retailers Animate, Gamers, Tora no Ana, and Melon Books will respectively be giving customers buying the Enako Rumic World Cosplay Album cards featuring Urusei Yatsura’s Lum, Inuyahsa’s Kagome, Ranma 1/2’s Ranma, and Maison Ikkoku’s Kyoko. While it’s unclear if the postcards themselves will have Takahashi illustrations, Enako photos, or both, it seems unlikely that stores would give out cards with characters Enako is not cosplaying as within the book, so it feels safe to assume that Lum, Kagome, Ranma, and Kyoko are all getting the Enako cosplay treatment.

As an added bonus, Enako will also be cosplaying as an original character Takahashi is designing just for the album.

▼ The “original character” designation means that Enako isn’t going to be cosplaying as Takahashi’s manga self-portrait.

Both Enako and Takahashi have said they’re happy to be collaborating on the project. “I couldn’t be more overjoyed that Enako is going to be cosplaying as my characters,” Takahashi commented. “I’m sure the results are going to be the cutest, highest-quality possible, and I’m really looking forward to seeing them.”

The 96-page Enako x Rumic World Cosplay Album is priced at 2,970 yen (US$23) and comes out September 6, but preorders can already be made online with Rakuten (here) and 7 Net (here).