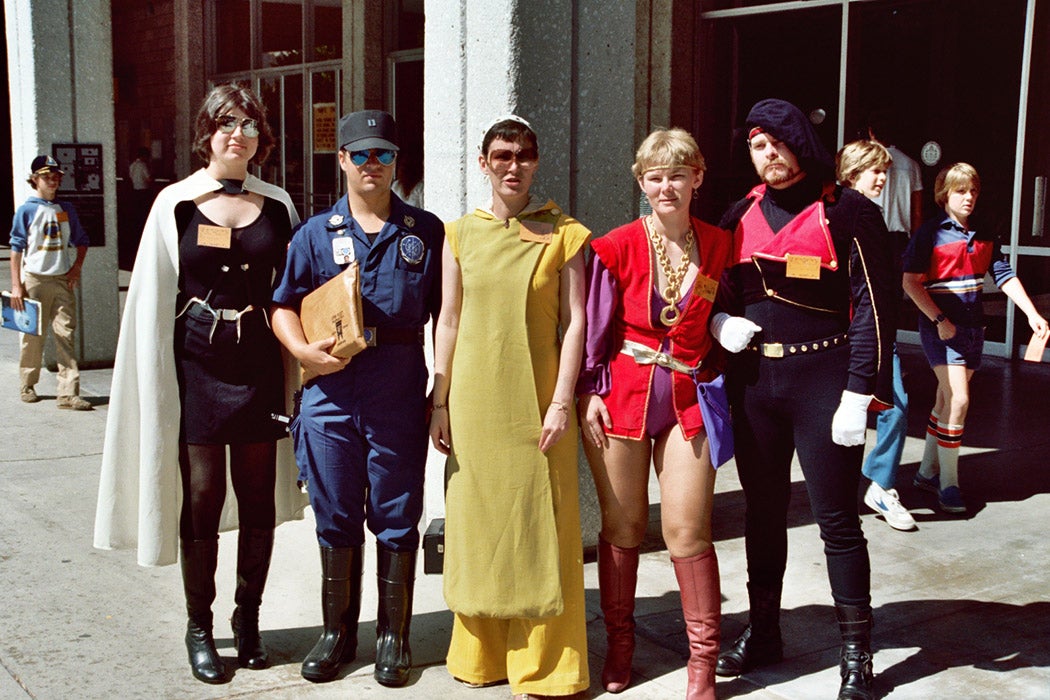 Comic-Con International 2022 opens on July 20th in San Diego, bringing together dozens of content creators, hundreds of exhibitors, and many thousands of spectators in one huge, sprawling celebration of mass-media fandom. For some of these folks, the convention to-do list includes picking out just the right outfit to pack—and that doesn’t mean so much “pack a layer in case it’s cold inside” as “will an entire Wookiee suit fit inside a regulation suitcase?”

One of the most visible and popular aspects of Comic-Con and the year-round constellation of fan conventions that have emerged in recent decades is attendees’ enthusiasm for attending in costume, a practice that’s known as cosplay. The word, a portmanteau of “costume play” attributed to 1980s Japanese manga buffs (Japanese: kosupure), at its simplest involves a fan expressing enthusiasm for a particular pop culture property by dressing and behaving as one of its characters. At a convention, folks might wait in line for coffee with a Smurf, various superheroes, and a Giger alien and not find any of it remotely odd.

Fan culture began early, but it didn’t truly coalesce until the postwar period in the United States, and it didn’t explode into its current form until after the millennium.

Now, you might at this point be thinking that this is all well and good, but humans have been playing dress-up in various capacities for centuries. What sets cosplay apart? Frenchy Lunning, in Cosplay: The Fictional Mode of Existence, points out that it’s a matter of entering a different, communal, quasi-fictional reality: “The goal in cosplay,” she writes,

is not to produce and perform a character to take part in a theatrical narrative designed for an audience to view, but for an individual fan subject to embody and identify with an adored character whose persona is real for the fan, actor, and/or creator of the cosplay costume. The creation of the costume is as much a part of the loving and community-based aspect of fandom as the actual performance. This separates the cosplay costume from its roots in costume history.

Cosplay as we know it wouldn’t have happened without the rise of mass-media popular culture in the nineteenth century. Though largely print driven, the new culture of common experience created fandom itself as a community-based exercise in experiencing (and re-experiencing) one’s favorite fantasies. P. T. Barnum appeared at an 1880s fan convention for young readers of the Golden Hours story paper, in perhaps the first event of its kind; and some scholars have identified proto-cosplay in the early twentieth century (see, for instance, the May 23, 1912, issue of The Seattle Star, which notes that one guest at a masked ball dressed up as Mr. Skygack, From Mars in homage to a then-popular comic).

Fan culture began early, but it didn’t truly coalesce until the postwar period in the United States, and it didn’t explode into its current form until after the millennium. A rough evolutionary timeline would connect Mr. Skygack’s party appearance with mid-century fans expressing their Star Trek enthusiasm; with properties like Star Wars and Rocky Horror encouraging costumed midnight-movie showings in the 1970s; and to the 1980s crossover between American and Japanese fans over anime and manga.

Most, if not all, of these groups were niche communities at first, with dedicated fandom generally viewed as oddly obsessive. As Henry Jenkins writes, even Comic-Con started small, as a “small regional comics convention in 1970 with 170 attendees.”

Suffice it to say, things changed. By 1980 there were 5,000 attendees, and more recent iterations of Comic-Con have topped 150,000 guests. This explosion had a number of factors propelling it. By the year 2000, collecting print comics was no longer the only fan game in town. Genre entertainment had moved into different cultural real estate, trading B-movie cult screenings for mainstream legitimacy and tentpole summer blockbusters in the multiplex. Would-be critics had the then-new blogosphere and social media to recap, celebrate, and speculate about their favorite franchises, making fandom both performative and competitive in new ways.

On a continuum, there are folks who enjoy dressing up and having casual fun with other fans at the occasional convention to those who spend significant time, effort, and money to buy or, in many cases, make, elaborate and pitch-perfect outfits that they wear on a circuit of themed events. Cosplay can involve gender-swapping characters and costumes, mashing up franchises or genre themes, and embracing other transformative approaches to pop culture phenomena. It can allow kids and adults to bond over shared enthusiasm, distant friends to connect, or “micro-celebrities” to compete and draw attention to themselves and their work.

Cosplay has also opened both opportunity and adversity for woman-identifying fans. It’s well established that women have had an uphill climb in many fan circles, despite being early pioneers in collective experience. This can extend to costume fabrication techniques. As Suzanne Scott writes, “Cosplay is an especially rich form of fan production in which to locate this analysis because material forms of fan production have historically been aligned with ‘boy culture.’” Despite the fact that many cosplayers and costume makers are women, the community still reckons with areas where women are not seen as natural participants outside of traditionally feminine arts like sewing or makeup. This is part and parcel of a long history of women in traditionally male pop-culture communities being seen as “wanna-bes” who have to prove themselves to male fans or act according to stereotypically male values (including acting as objects of the heterosexual male gaze). Pre-COVID, there was evidence of increasing push-back against misogyny in fandom.

In a 2016 TED talk, maker and Mythbusters star Adam Savage suggested that everything we choose to put on our bodies is part of a narrative and a sense of identity, and this means there are many ways to cosplay. It’ll be great to see how many of them are on display at Comic-Con.